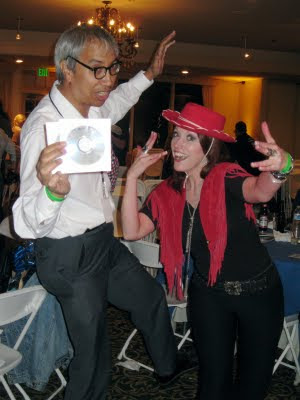 (photo by Donna M.)
When I attended the Hollywood Charity Horseshow banquet on April 30 this year during the William Shatner Weekend, I sat down at our Shatner & Friends, Int'l. table. At the next table I saw a familiar woman sit down. I looked and looked, doing double-takes in my mind. Finally, I decided she was who I thought she was. She saw me looking and immediately greeted me, coming over to my table. It was Kiki Stockhammer of Newtek Video Toaster and Warp 11 rock-and-roll fame!
We gabbed excitedly, and I asked her why she was there and why wasn't her Warp 11 band doing the music for the banquet. :) To the former question, she said that she was part of the Newtek crowd providing video equipment for the live webcast . To the latter, she laughed.
After the banquet, we talked some more (especially about the new Viva Amiga film being produced), and I tried to get some video of her meeting William Shatner, but I was not very successful in getting a good camera angle in the fast-moving crowd.
Truly,
Robert Bernardo
Fresno Commodore User Group
http://videocam.net.au/fcug
July 23-24 Commodore Vegas Expo v7 2011 - http://www.portcommodore.com/commvex
Posted by RobertB at 19:54