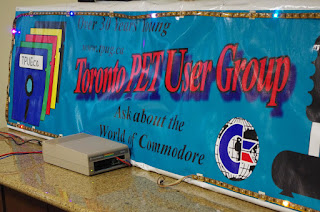 Saturday, December 5, 2015 marked the day of the annual World of Commodore, put on by the Toronto Pet User’s Group at the Admiral Inn in Mississauga, Ontario. It’s an annual tradition for our household, and a great opportunity to catch up with old friends while making new ones. It was especially nice to see my friend Bob Yewchuck, writer of one of my favourite blogs, The Bob Angle, on his birthday. 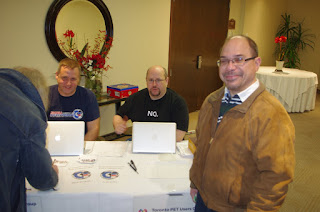 There was the ever-popular freebie table, where I scored a couple of Jumpdisk disk magazine covers that I don't yet have, an MPS 803 printer, and a 2GB CF card, while my son scored a collection of Amiga magazine cover CD's. There was also the raffle table. This year saw a lot of attendees enjoying the show; at 11:00, it was becoming so crowded, it was sometimes difficult to move around! It was great seeing so many people enjoying the hobby of retro computing. For me, it was nice to spend time with Dan Kovaks as he demonstrated his Commodore 128 connecting to the Internet. Thanks to Dan for selling me his spare 64NIC+ which I'm still trying to get working. 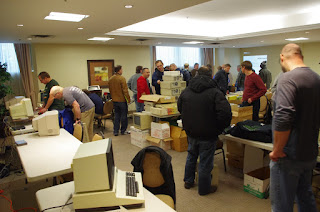 It was really good to see that Jim Brain of Retro Innovations was able to make it this year; his products are a favourite of mine, because he offers useful, well-made products at decent prices, typically in the $50-$60 range. He brought his usual bag of goodies this year. 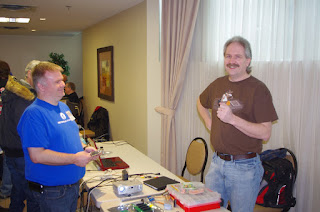 It was also great to see Joe Palumbo of JP PBM return with his variety of products, most of which are original, some still in shrink wrap. For a mere $20, I was able to buy an upgrade Agnus chip for my Amiga 2000, so that it now can address a full megabyte of video memory instead of the 512k that was standard when I bought my Amiga. This was an upgrade I had always wanted. I was also able to buy a hard to find video adapter for my Commodore 128 for only $10, and enjoyed perusing his collection of software. Joe continues to be a valuable source of original software and hardware for the retro computing community. 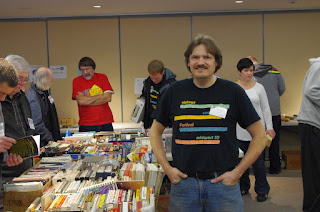 There was a fire alarm at the Admiral Inn before lunch hour, which added some drama to the event. It turned out that someone left a cigarette butt by a vent and was not caused by Dan using his Commodore 128 to connect to the Illuminati as we had first suspected. 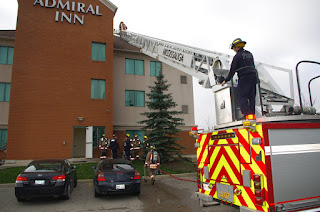 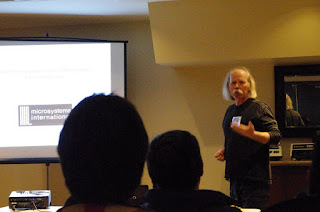 The nice thing about these presentations is the fact that we get to see examples of these early computers. 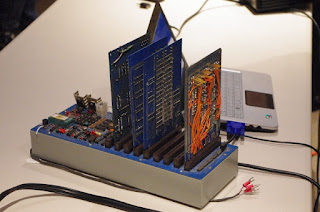 Next up was Leif Bloomquist's demonstration of his Wi-fi modem for the Commodore 64 (and 128): 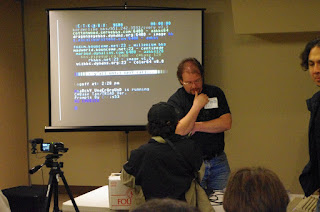 At $150, it's a nice, comprehensive package that goes well with any modern C64 that you may want to take to Starbucks. 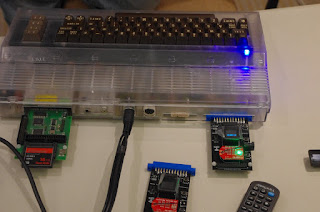 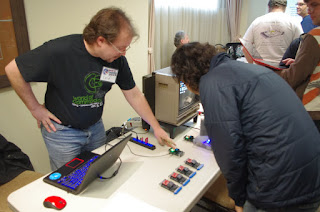 At 3:00, Jim Brain teamed up with Leif to demonstrate his new products for the Vic 20, including a MIDI controller that works both ways (using the Vic as a MIDI instrument as well as having the Vic controlling another instrument), along with a device for the Vic that stores game images and provides various types of expansion. 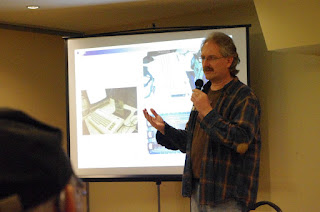 A brief demonstration of the Vic being utilized as a MIDI instrument, by the talented Leif:

At 4:00, Trevor Grove, formerly with the University of Waterloo, presented "SuperPET development: A view from the trenches," providing a unique perspective of developing for education. 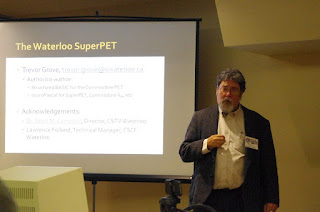 Unfortunately, my son and I had to leave after this time to attend a family function, but the raffle draw happened at 5:00, followed by Dan Lasowski's presentation of "C64 Music Jam with Fastfingers."

All in all, it was an excellent way to spend the first Saturday of December. We got the T-shirt which I will surely show off, and look forward to next year. Who knows, maybe I'll cook up something to contribute at the 2016 World of Commodore! Meanwhile, enjoy these other pictures I took at the event. 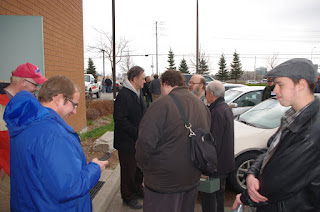 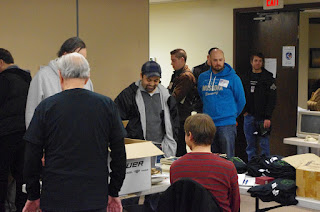 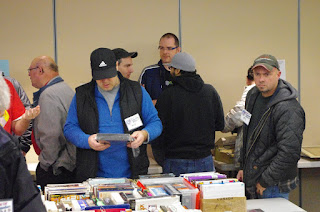 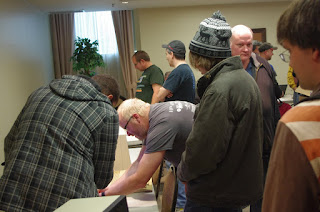 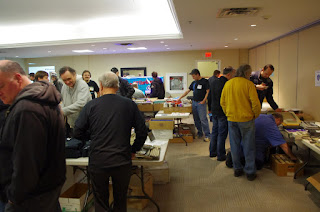