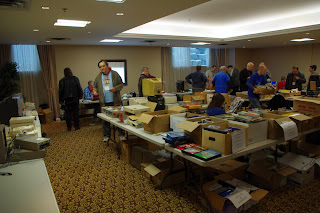 I had the opportunity to attend World of Commodore 2012 in Mississauga, Ontario yesterday. The event took place in a conference room in the Admiral Inn. This is an annual event put on by the Toronto Pet User's Group (TPUG); the oldest user's group in Canada, and the second oldest user's group in the world. There were a variety of exhibits, including demonstrations and products for sale, a freebie table, and an itinerary filled with excellent speakers covering an interesting range of topics from modern hardware developments to the use of Commodore computers in the arts. 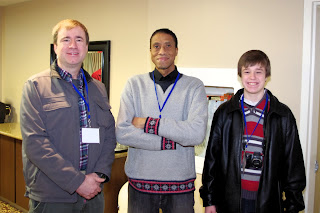 I had the opportunity to meet some old friends and make some new ones. It was also a place to rekindle some friendships I believed were long lost. The real pleasure was getting to meet Jeffrey Daniels of Denial in person for the first time the following day. With so many fascinating individuals who attended the event, some from some great distances, it was worthwhile just to be in the same room and talk about our varied interests in retro computing. Ever increasingly, the appeal seems to be about the aesthetics and creative artistic outlet represented by these vintage machines. 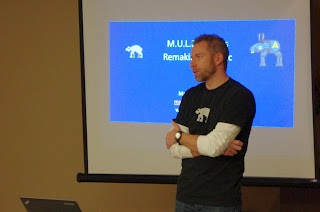 There's a trend these days to rekindle some of the great classics on modern hardware, so it was a pleasure to listen to a speaker from Comma 8 studios describe the process and challenges involved in bringing a modern version of M.U.L.E. to modern platforms like iPhone and Android. We got to listen to some possible theme music for the upcoming game, got to see how the characters are now rendered graphically, and got some insight into some of the challenges of creating a multiplayer game on these devices. 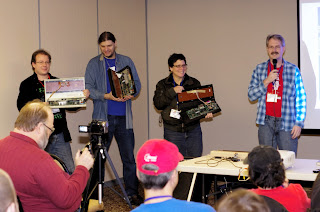 Jim Brain of Retro Innovations was present with a table selling his clever devices (I'm a huge fan and user of his uIEC), and announced that he was now able to legally sell JiffyDOS for the Vic 20, Plus/4, and Commodore 16 computers. I made sure to buy the first Vic 20 JiffyDOS chip after his presentation. This, combined with the uIEC and daughterboard, brings these computers into the 21st century; with the uIEC providing a modern SD card alternative to the 1541 disk drive, and JiffyDOS a fast and easy way to work with SD card files and images on the uIEC. 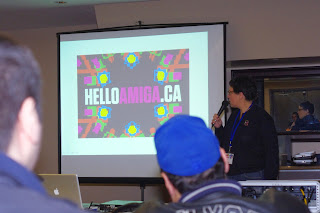 Next, we were treated by a presentation by a speaker from the Toronto Animated Image Society (TAIS) about a project, HelloAmiga.ca, where the Amiga computer was used in creating works of animated art. The microphone was then turned over to Mark Pellegrino, who treated us to G.I.R.L. This animated short work of art was completed using Deluxe Paint in an emulated Amiga. It was somewhat dark, somewhat disturbing, and yet very funny and entertaining at the same time. It was excellent. 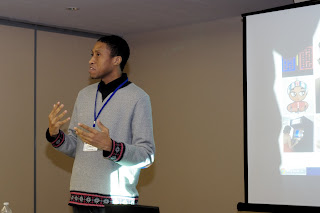 Going along with the creative arts theme, Jeffrey Daniels of Denial presented his work the next day, explaining his philosophy of programming and his reasons for that philosophy. Some of his games are stunningly original, all are very playable. By drawing on subtle concepts of our consciousness, he develops themes that intrigue and draw us in. Some seasoned Commodore users are surprised that Jeffrey doesn't use machine language, as some of his games are so sophisticated they suggest that they might be written that way. I often think that had Jeffrey's games existed at the time the Vic 20 was created, Commodore's original intention of using the Vic's video circuitry in arcade machines may have been realized. 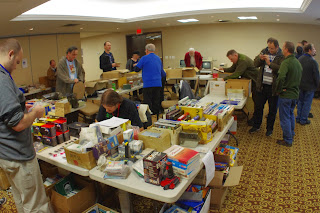 Unfortunately, I arrived too late to catch the first presentation, and had to leave before the final one. However, the event was well worth the $10.00 admission fee, and I decided to sign up as a TPUG member for a year. Besides buying Jim Brain's clever products (a daughtercard for my uIEC, along with JiffyDOS for my Vic and 64), I also scored an MPS 802 in great shape from the freebie table, and Cymbal's Games 20 book 1 for a dollar. Those of you who know me have seen my Youtube video of me opening up a Vic 20 for Christmas, showing off the Vic and this very Cymbal games book. the MPS 802 was the first printer I ever owned, and completes my original Commodore 64 set-up.

More pictures of the event can be found here: World of Commodore 2012 Web Album

If you're reading this and would like to contribute to this blog, perhaps to add details on the speakers I missed or to provide your own perspective, feel free to contact me or Robert to add you as an author.
Posted by Paul at 08:24